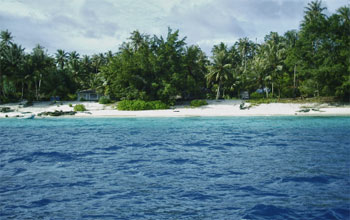 Nias Island lies about 125 km of west Sumatra Island on the Indian Ocean. It is part of North Sumatra Province. The water surround the island is great for sea activities, such as surfing and scuba diving. The people also have curious culture, which will enrich visitor's heart. The island has some prehistoric remains, which built on megalithic Stone Age, and considered came from the oldest megalithic culture in Indonesia.

The local call their land as Tano Niha or "land of the People", while the people calls them selves as Ono Noha. Ethnically, the Niasers are involved in to the Ptoto-Malay ethnic who once ever get with the Asian Proto-mongoloid world. Niasers speak a kind of language related to Malagasy. Because of the similarity in languages, custom, body size of the Niasers with the Bataks on Sumatra mainland, it is possible that the Niasers have derived from the Bataks.