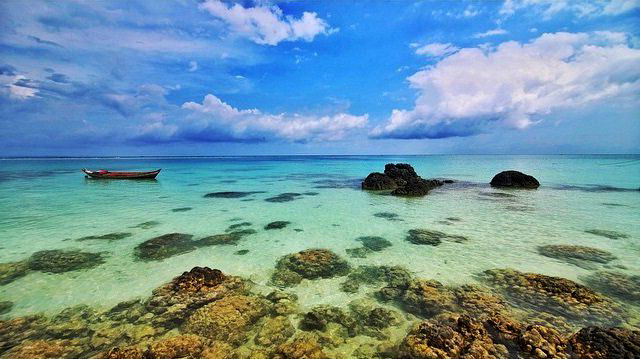 In Indonesia, a beautiful region called Nias Islands keeps luring more tourists over time. One of the reasons is that it becomes the home of many majestic beaches, including Tureloto. The beach is located in Balefadorotuho Village and it belongs to Lahewa Sub-District. According to the locals, the site becomes famous due to its unspoiled nature and pristine seawater. This is why most visitors choose it as the place to enjoy sightseeing, relaxation, boat riding, and photography. What feature makes it unique, though?

The Nuance
Unlike regular beaches, Tureloto doesn’t have much sandy area. Instead, it features lots of corals scattering all over the shoreline. The next unique feature is that the beach is quite sloping, so the seawater appears more beautiful and safer from swimming. The sea combines with the sand and creates creamy light blue color. On the site, the waves are small as well! Next, you can find a small hut facing the sea. Somehow, it becomes tourists’ favorite spot for resting and sightseeing. Another important feature is the wind, which is quite strong and gusty.

Exploring Tureloto Beach
The best feature of Tureloto Beach is the sea scenery! It is because the beach faces the Indian Ocean, which is famous for its strong wind and big waves. Fortunately, the waves are considered small near to the beach due to the presence of coral reefs. These keep the big waves away, so the sweater looks so peaceful there. Aside from the view of the sea, tourists can find an exotic white sandy beach as well. However, the size of such sandy area is not quite broad and it doesn’t make a good place for sightseeing. As an alternative, you can use the hut to do such activity.

For those who want to enjoy sightseeing in Tureloto Beach, the most recommended time to visit is at noon. Why is that? The ray of the sun gleams beautifully, reflected on the surface of the seawater and the white sand. Also, the coral reefs are seen clearly at such time. These objects come in different size and shape, actually. One of them has a similar shape to a human’s brain and the locals call it Batu Otak or the stone of brain.

Another recommended activity is indeed swimming. Thanks to the presence of coral reefs. The waves become safer for playing and swimming on location. Here is the fact. The beach has a high level of salt, which is similar to that of the Dead Sea. That means people can easily float on the water as their body becomes lighter. Isn’t it great?

How to Get There
From Gido City (the capital of Nias Islands Regency), a trip to Tureloto Beach takes about 2-3 hours and the distance is 88.5 km. Also, it can be done through Raya Pelud Binaka. As for an alternative, you can come from Gunung Sitoli City, which is about 80 km apart from the site. Once arriving at Lahewa Sub-District, your last destination is Balefadorotuho Village.

Where to Stay
Nasional Hotel