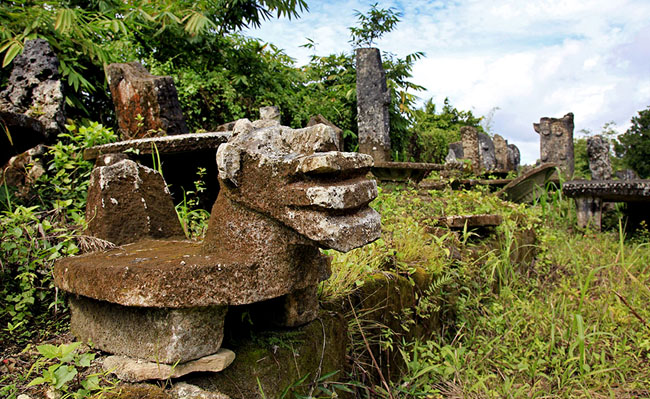 Nias Islands has become a hot topic when it comes to a vacation. It is part of North Sumatra Province and offers various attractions to tourists, including beaches, islands, and culture. Recently, many people have been talking about the famous megalithic site in Nias as well, which is located in Gomo Plateau, South Nias Regency. As the name suggests, it is the place where tourists can witness the heritage of megalithic culture in Nias. That means visitors can learn the history as well as enjoy the natural scenery from the location.

The Nuance
The unique part is that the site is located on a plateau. No wonder, the nuance feels so great up there. Once tourists get to the site, they can see numerous shapes and size of megalithic stones, including several historical statues. Not to mention they can see Sakrofagus, Dolmen, and Menhir! These items were used by the villagers during a religious ceremony in order to respect for the ancient spirits. It is said such ceremony helped them to prevent any misfortunes and disasters in the future. Due to the variety of those valuable items, more people are interested to come to the site either to learn the history or to take pictures of those stones.

Exploring the Site
Here is an important tip. Before heading to the site, it is better to get a local guide first as he would provide information regarding the history of the site and show you around efficiently. Once arriving at the site, the first thing to do is definitely to hear the story of Nias’ Megalithic culture. It is said the presence of such stones originated from the Neolithic Era, which is around 1000 BC.

The unique part is that the site is located in the highland (Gomo Plateau). According to the locals, people in the past lived in such location in order to avoid any attacks from the enemies. Not to mention they considered the plateau as a sacred or holy place. As for tourists, it is possible to get around the site and witness all the ancient figurines there. Furthermore, photography is quite recommended due to the breathtaking views of the environment. Thanks to the strategic location.

The only disappointment is that no facilities are available on the site. It is because the locals seem to overlook the value of such historical spot and leave it that way, untouched. The good news is that more tourists come to the site and help to promote it to others, which would trigger the government to take care of that place. Hopefully, a better route and more facilities are built in the near future.

How to Get There
From Gunungsitoli City, tourists only need to use Raya Pelud Binaka and head to South Nias Regency (Gomo Plateau). The distance is 72.7 km, so it takes about 2 hours to get to the location. As mentioned earlier, it is better to come with a tour guide for a more efficient trip.